What does Ctrl+Q Do?

Learn all the functions of Ctrl+Q here! In Microsoft Word, Ctrl+Q is used to remove the paragraph's formatting.

Also referred to as Control Q and C-q, Ctrl+Q is a shortcut key that varies depending on the program being used.

In Microsoft Word, Ctrl+Q is used to remove the paragraph's formatting.

In many programs, the Ctrl+Q key may be used to quit the program or close the programs window.

How to use the Ctrl+Q shortcut key

To use the keyboard shortcut Ctrl+Q, press and hold either Ctrl key on the keyboard and while continuing to hold, press the "Q" key with either hand.

In Audacity, pressing the Ctrl+Q exits the program.

In Opera, pressing the Ctrl+Q closes the browser.

Use the shortcut Ctrl+U to mark a selected e-mail as un-read.

In word, Ctrl+Q is used to remove the paragraph's formatting.

List of A to Z computer shortcut keys for Microsoft windows. ☆☛✅ Control Keys in Computer A-Z.

In computer, a Control key is a modifier key which, when pressed in conjunction with another key, performs a certain action.

Apple command key on Apple computer keyboards the Ctrl key is written as "control" and is next to the option key and command key as shown in the picture to the right.

As far as the placement, the control keys are found in the same location as the Ctrl keys on an IBM computer.

Ctrl is used in keyboard shortcut key such as the three finger salute or Ctrl+Alt+Del.

This key combination suggests pressing and holding down the Ctrl, Alt, and Del keyboard keys to open the Task Manager or reboot the computer. 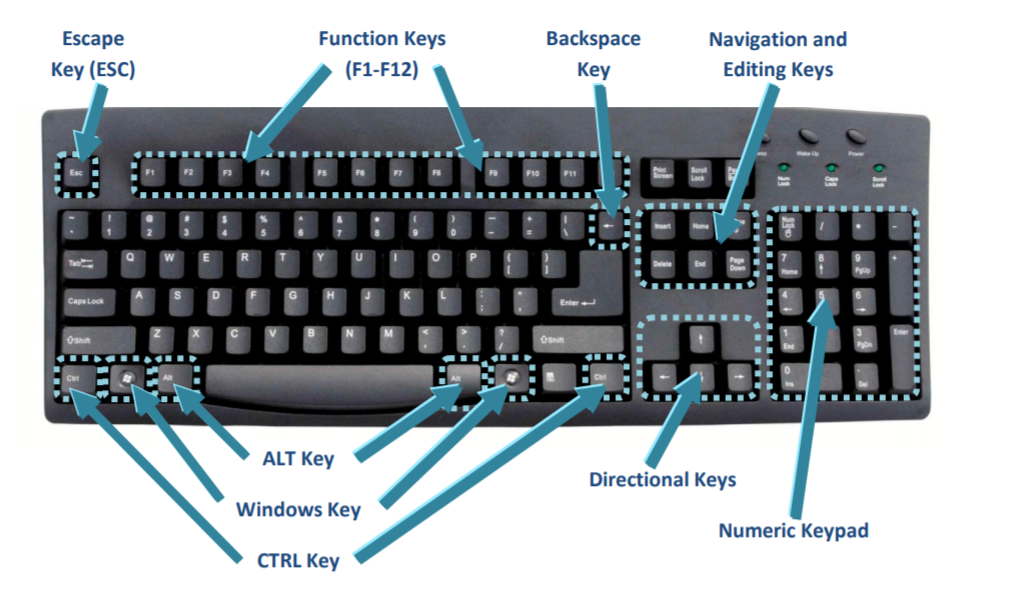 Ctrl+A These two keys will select all text or other objects.
Ctrl+B Bold highlighted text.
Ctrl+C Copy any selected text or another object.
Ctrl+D Bookmark an open web page or open font window in Microsoft Word.
Ctrl+E Center text.
Ctrl+F Open find window.
Ctrl+G Open Find in a browser and word processors.
Ctrl+H Open the Find and Replace in Notepad, Microsoft Word, and WordPad
Ctrl+I Italicize text.
Ctrl+J View downloads in browsers and set justify alignment in Microsoft Word.
Ctrl+K Create a hyperlink for the highlighted text in Microsoft Word and many HTML editors.
Ctrl+L Select address bar in a browser or left align text in a word processor.
Ctrl+M Indent selected text in word processors and other programs.
Ctrl+N Create a new page or document.
Ctrl+O Open a file in most programs.
Ctrl+P Open a print window to print the page you're viewing.
Ctrl+R Reload page in browser or right align text in a word processor.
Ctrl+S Save the document or file.
Ctrl+T Create a new tab in an Internet browser or adjust tabs in word processors.
Ctrl+U Underline selected text.
Ctrl+V Paste any text or another object that has been copied.
Ctrl+W Close open tab in a browser or close a document in Word.
Ctrl+X Cut selected text or another object.
Ctrl+Y These keys will redo any undo action.
Ctrl+End Moves cursor to the end of a document instead of end of the line.
Ctrl+Z Pressing these two keys will undo any action.
Ctrl+Esc Open the Windows Start Menu.
Ctrl+Tab Switch between open tabs in browsers or other tabbed programs.
Ctrl+Shift+Tab will go backwards (right to left).

What is an Operating System? » Computer Shortcut Keys and their Functions