Computer Diagram and Label; Diagram of a computer system unit and all the components.

Diagram labeling the major components of a computer HDD. 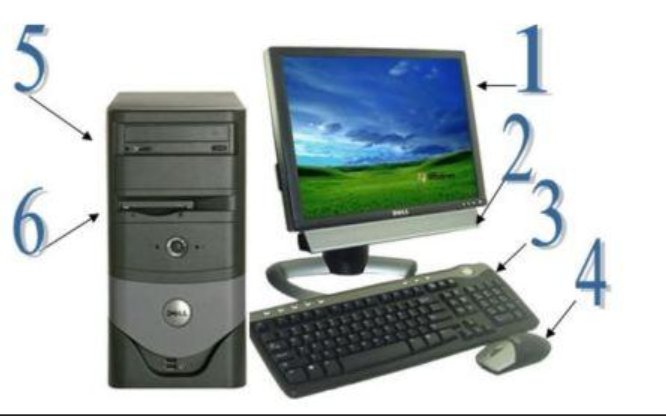 What is a Computer System Unit? - Function, Components & Definition.

A computer system unit is the enclosure that contains the main components of a computer.

It is also referred to as a computer case or tower.

A Computer Diagram and Labels

A typical desktop computer consists of a computer system unit, a keyboard, a mouse, and a monitor.

The computer system unit is the enclosure for all the other main interior components of a computer.

It is also called the computer case, computer chassis, or computer tower.

Cases are typically made of steel or aluminum, but plastic can also be used. While most computer cases are rather dull, black, metal boxes, some manufacturers try to give the unit some flair with color and special design elements.

The primary function of the computer system unit is to hold all the other components together and protect the sensitive electronic parts from the outside elements.

A typical computer case is also large enough to allow for upgrades, such as adding a second hard drive or a higher-quality video card.

It is relatively easy to open up a computer system unit to replace parts and install upgrades.

In contrast, it is quite difficult to open up a laptop computer, which is not designed with replacements and upgrades in mind.

In most computer system units, the front side contains the elements a user needs frequently, such as the power button, an optical disk drive, an audio outlet for a pair of headphones, and a number of USB connections.

The back side contains all other connections - for power, monitor, keyboard, mouse, Internet connection, and any other peripheral devices.

There are typically more connections than the minimum necessary to allow for expansion.

Inside the Computer Case

Once you open up a computer case, it can initially be difficult to recognize the various components, especially all the different wires.

However, if you look closely, you will probably start to recognize a number of components.

In this particular example, the motherboard is placed vertically, which is quite common.

One side of the motherboard is accessible from the back of the computer case - this includes the various connectors for input and output devices as well as expansion slots for additional peripherals.

The motherboard also contains the central processing unit (CPU), although it can be difficult to see.

A large fan is often placed on top of the CPU to avoid overheating. The motherboard also contains the main memory of the computer.