Mistakes Made in Form One Secondary School Selections

Mistakes Lock Most Students Out of Dream Schools, Says Magoha

According to last year’s Form One selection, Nanyuki High School received 154,524 applications yet it can accommodate only 384 students.

Several candidates made mistakes in selecting secondary schools leading to many of them not getting calling letters to the institutions they picked.

These mistakes also led to certain secondary schools receiving applications that outnumber by hundreds of thousands the spaces they have.

Education Cabinet Secretary George Magoha, while releasing Form One Selection results yesterday, said the mistakes happened because candidates did not get proper guidance and direction.

He said certain primary schools had all candidates selecting the same secondary schools in the same order, and that is what led to certain high schools receiving more applications than they can accommodate.

For instance, Nanyuki High School received 154,524 applications yet it can accommodate only 384 students.

When candidates from one primary school chose the same secondary schools and in the same order, it becomes impossible for any of them to be picked because they create “unnecessary competition”, according to Prof Magoha.

He said many of the candidates missed their preferred schools because it was impossible to select more than five learners from the same primary school.

The distribution in the extra-county schools is done on 20:40:40 ratio, with 20 per cent of the spaces reserved for the host sub-county, 40 per cent for the host county and the remaining 40 for the rest of the counties.

Placement of learners in county schools is done on a 20:80 ratio where 20 per cent of the spaces are allocated to the host sub-county and 80 per cent shared equitably among all the sub-counties in a given county.

Sub-county schools are usually the majority, and usually draw their learners from within the sub-counties.

It is an occurrence that caught the attention of many stakeholders who called for a thorough review of the selection process by bringing on board highly qualified career masters to guide learners.

“The government must not just sit back and leave this process to primary school teachers and parents,” said Kuppet national chair Omboko Milemba. “This is a serious issue that requires professional assistance from career and guidance professionals.”

Magoha admitted that such challenges caused the delay in releasing the results.

“I direct my relevant ministry officials to mount proper sensitisation programmes on the Form One selection to ensure candidates make wise choices through proper advice.”

The CS also announced that 7,927 candidates who sat the 2020 KCPE will not join Form One because they were either in prison, in refugee camps or were simply over age.

“This is after excluding inmates, over age candidates, and candidates from refugee camps. We have therefore placed all candidates in secondary schools in keeping with our 100 per cent transition policy.”

While the Ministry of Education celebrates the third cohort of 100 per cent transition policy, headteachers are raising a red flag over inadequate infrastructure in the wake of an expected rise in enrollment.

“We are ready to receive the learners, but we are afraid our infrastructure will be overstretched. We need a thorough investment towards infrastructure to sustain the 100 per cent transition,” said Kenya Secondary Schools Heads Association chair Kahi Indimuli, who called on the Teachers Service Commission (TSC) to employ more teachers.

TSC boss Nancy Macharia said the commission intends to employ 5,000 teachers in the next financial year.

“Treasury has allocated TSC Sh2.5 billion for the recruitment of 5,000 teachers to ease the load in handling the increased enrollment. Qualified and registered teachers should look out for advertisements for employment opportunities next month,” she said. 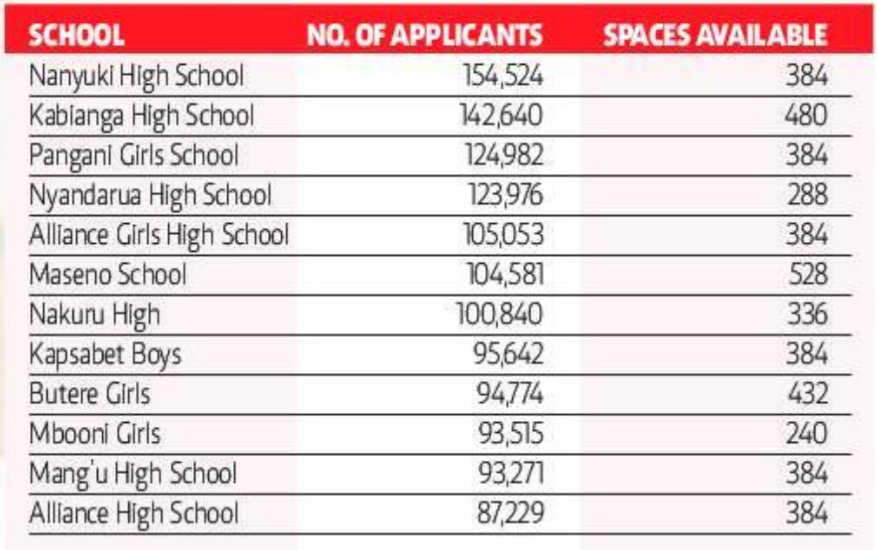