This slender narrative has no pretensions on the regularity of a story, or the development of situations and feelings;

It is but a slight sketch, delivered nearly as it was narrated to me by one of the humblest of the actors concerned: nor will I spin out a circumstance interesting principally from its singularity and truth, but narrate, as concisely as I can, how I was surprised on visiting what seemed a ruined tower, crowning a bleak promontory overhanging the sea, that flows between Wales and Ireland, to find that though the exterior preserved all the savage rudeness that betokened many a war with the elements, the interior was fitted up somewhat in the guise of a summer-house, for it was too small to deserve any other name.

It consisted but of the ground-floor, which served as an entrance, and one room above, which was reached by a staircase made out of the thickness of the wall.

This chamber was floored and carpeted, decorated with elegant furniture; and, above all, to attract the attention and excite curiosity, there hung over the chimney-piece -- for to preserve the apartment from damp a fire-place had been built evidently since it had assumed a guise so dissimilar to the object of its construction -- a picture simply painted in water-colours, which seemed more than any part of the adornments of the room to be at war with the rudeness of the building, the solitude in which it was placed, and the desolation of the surrounding scenery.

This drawing represented a lovely girl in the very pride and bloom of youth; her dress was simple, in the fashion of the day -- (remember, reader,

I write at the beginning of the eighteenth century), her countenance was embellished by a look of mingled innocence and intelligence, to which was added the imprint of serenity of soul and natural cheerfulness. 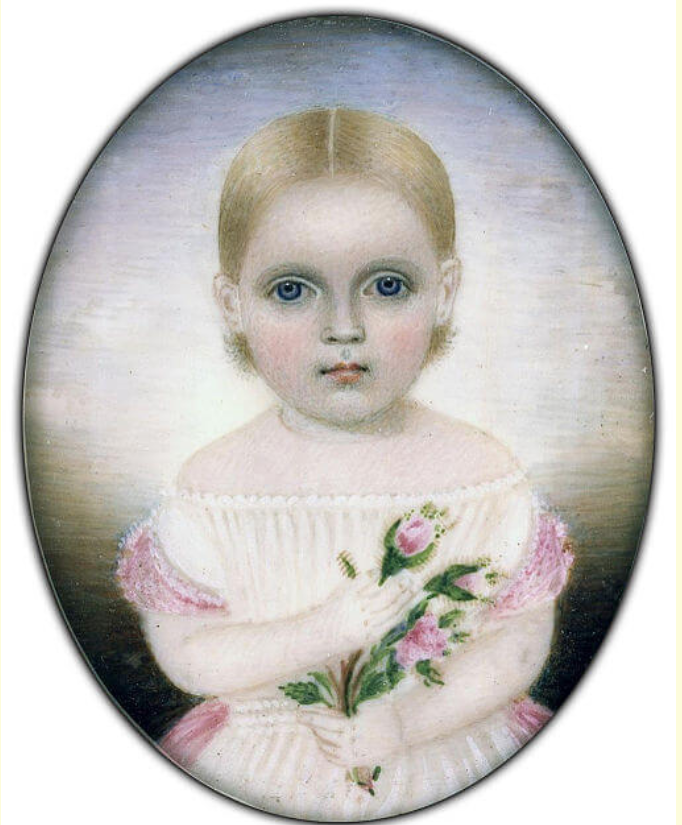 She was reading one of those folio romances which have so long been the delight of the enthusiastic and young; her mandoline was at her feet -- her parroquet perched on a huge mirror near her; the arrangement of furniture and hangings gave token of a luxurious dwelling, and her attire also evidently that of home and privacy, yet bore with it an appearance of ease and girlish ornament, as if she wished to please.

Beneath this picture was inscribed in golden letters, "The Invisible Girl."

Rambling about a country nearly uninhabited, having lost my way, and being overtaken by a shower, I had lighted on this dreary looking tenement, which seemed to rock in the blast, and to be hung up there as the very symbol of desolation.

I was gazing wistfully and cursing inwardly my stars which led me to a ruin that could afford no shelter, though the storm began to pelt more seriously than before,

when I saw an old woman's head popped out from a kind of loophole, and as suddenly withdrawn: -- a minute after a feminine voice called to me from within, and penetrating a little brambly maze that skreened a door, which I had not before observed, so skilfully had the planter succeeded in concealing art with nature I found the good dame standing on the threshold and inviting me to take refuge within.

"I had just come up from our cot hard by," she said, "to look after the things, as I do every day, when the rain came on -- will ye walk up till it is over?"

I was about to observe that the cot hard by, at the venture of a few rain drops, was better than a ruined tower, and to ask my kind hostess whether "the things" were pigeons or crows that she was come to look after, when the matting of the floor and the carpeting of the staircase struck my eye.

I was still more surprised when I saw the room above; and beyond all, the picture and its singular inscription, naming her invisible, whom the painter had coloured forth into very agreeable visibility, awakened my most lively curiosity: the result of this, of my.exceeding politeness towards the old woman, and her own natural garrulity, was a kind of garbled narrative which my imagination eked out, and future inquiries rectified, till it assumed the following form.

Some years before in the afternoon of a September day, which, though tolerably fair, gave many tokens of a tempestuous evening, a gentleman arrived at a little coast town about ten miles from this place; he expressed his desire to hire a boat to carry him to the town of about fifteen miles further on the coast.

The menaces which the sky held forth made the fishermen loathe to venture, till at length two, one the father of a numerous family, bribed by the bountiful reward the stranger promised -- the other, the son of my hostess, induced by youthful daring, agreed to undertake the voyage.

The wind was fair, and they hoped to make good way before nightfall, and to get into port ere the rising of the storm.

They pushed off with good cheer, at least the fishermen did; as for the stranger, the deep mourning which he wore was not half so black as the melancholy that wrapt his mind.

He looked as if he had never smiled -- as if some unutterable thought, dark as night and bitter as death, had built its nest within his bosom, and brooded therein eternally; he did not mention his name; but one of the villagers recognised him as Henry Vernon, the son of a baronet who possessed a mansion about three miles distant from the town for which be was bound.

This mansion was almost abandoned by the family; but Henry had, in a romantic fit, visited it about three years before, and Sir Peter had been down there during the previous spring for about a couple of months.

The boat did not make so much way as was expected; the breeze failed them as they got out to sea, and they were fain with oar as well as sail, to try to weather the promontory that jutted out between them and the spot they desired to reach.

They were yet far distant when the shifting wind began to exert its strength, and to blow with violent though unequal puffs.

Night came on pitchy dark, and the howling waves rose and broke with frightful violence, menacing to overwhelm the tiny bark that dared resist their fury.

They were forced to lower every sail, and take to their oars; one man was obliged to bale out the water, and Vernon himself took an oar, and rowing with desperate energy, equalled the force of the more practised boatmen.

There had been much talk between the sailors before the tempest came on; now, except a brief command, all were silent.

One thought of his wife and children, and silently cursed the caprice of the stranger that endangered in its effects, not only his life, but their welfare; the other feared less, for he was a daring lad, but he worked hard, and had no time for speech; while Vernon bitterly regretting the thoughtlessness which had made him cause others to share a peril, unimportant as far as he himself was concerned, now tried to cheer them with a voice full of animation and courage, and now pulled yet more strongly at the oar he held.

The only person who did not seem wholly intent on the work he was about, was the man who baled; every now and then he gazed intently round, as if the sea held afar off, on its tumultuous waste, some object that he strained his eyes to discern.

But all was blank, except as the crests of the high waves showed themselves, or far out on the verge of the horizon, a kind of lifting of the clouds betokened greater violence for the blast.

At length he exclaimed -- "Yes, I see it! -- the larboard oar! -- now! if we can make yonder light, we are saved!" Both the rowers instinctively turned their heads, -- but cheerless darkness answered their gaze.

"You cannot see it," cried their companion, 'but we are nearing it; and, please God, we shall outlive this night."

Soon he took the oar from Vernon's hand, who, quite exhausted, was failing in his strokes.

He rose and looked for the beacon which promised them safety; -- it glimmered with so faint a ray, that now he said, "I see it;" and again, "it is nothing:" still, as they made way, it dawned upon his sight, growing more steady and distinct as it beamed across the lurid waters,.which themselves be came smoother, so that safety seemed to arise from the bosom of the ocean under the influence of that flickering gleam.

"What beacon is it that helps us at our need?" asked Vernon, as the men, now able to manage their oars with greater ease, found breath to answer his question.

Join in and write your own page! It's easy to do. How? Simply click here to return to Short Stories for Kids.