Answer all the questions in this Section in the spaces provided.

2. (a) Give one function for each of the following parts of a light microscope: (2 marks)

(b) Distinguish between a tissue and an organ system. (2 marks)

(b) Give one role of each of the following in plant roots: (2 marks)

4. (a) Name the region of the alimentary canal where amino acids are absorbed. (1 mark)

(b) Other than provision of food, state another importance of photosynthesis to animals. (1 mark)

5. (a) State two features of the leaf epidermis that allows light to pass through. (2 marks)

(b) What are the functions of the following minerals in the human body? (2 marks)

6. (a) State two environmental conditions that contribute to low rate of transpiration in plants. (2 marks)

(b) Give one function of each of the following components of blood: (2 marks)

(b) State what happens to the following structures on the chest cavity during inhalation:(2 marks)

(b) Give two adaptations of blood capillaries to their function. (2 marks)

9. The diagram below represents part of a human organ. 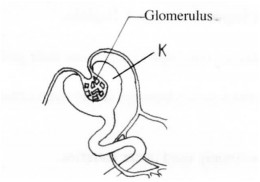 b)Explain why contents of K include non excretory substances in a healthy person.(2 marks)

Answer all the questions in this Section in the spaces provided.

11 A mixture contains ammonium chloride, sodium chloride and sand. Describe how one can separate and recover the substances in the mixture. (3 marks)

12 The curves below were obtained by a student after heating two solid substances. 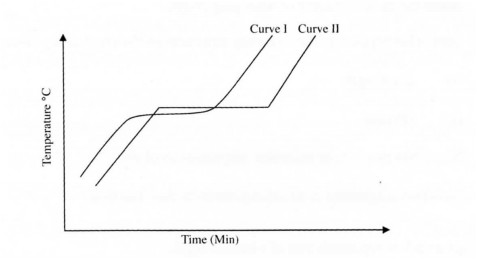 (a) Which curve represents an impure substance? Explain. (11 marks)
(b) The ray successively passes through the tube (Ray is parallel to the walls of the tube.

- Focusing the electrons into a ﬁne beam.

33. Pure silicon is doped with a trivalent element. This results in the three valency electrons of the impurity pairing with electrons of silicon and thus leaving a hole in the structure.