Disc ploughs are of two types

A standard disc plough consists of a series of individually mounted, inclined disc blades on a frame supported by wheels.

These ploughs usually have from 2 to 6 disc
blades, spaced to cut 18 to 30 cm per disc.

Each disc revolves on a stub axle in a thrust
bearing, carried at the lower end of a strong standard which is bolted to the plough beam
The discs are tilted backward at an angle of 15 – 25º from the vertical (tilt angle) and with a horizontal diameter disc face angle of 42 – 45 º (disc angle) from the direction of
travel.

Disc diameters are commonly 60 – 70 cm. In action, the discs cut the soil, break it and push it sideways.

There is little inversion of furrow slice as well as little burying of weeds and trashes compared to mouldboard plough.

Scrapers are furnished as regular equipment on most standard disc ploughs which assist in covering trash and prevent soil build up on discs in sticky soils.

Disc ploughs are most suitable for conditions under which a mouldboard plough do not work satisfactorily, such as in hard, dry soil, in sticky soils where a mould board will not scour, and in loose push type soil such as peat lands. 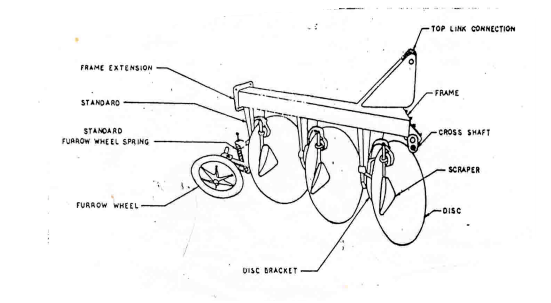 A few important terms connected with disc plough are explained below

Disc: It is a circular, concave revolving steel plate used for cutting and inverting the soil.

Disc angle: It is the angle at which the plane of the cutting edge of the disc is inclined to the direction of travel .

Usually the disc angle of good plough varies between 42° to 45°.

Tilt angle: It is the angle at which the plane of the cutting edge of the disc is inclined to a vertical line.

Scraper: It is a device to remove soil that tends to stick to the working surface of a disc.

Concavity: It is the depth measured at the centre of the disc by placing its concave side on a flat surface. 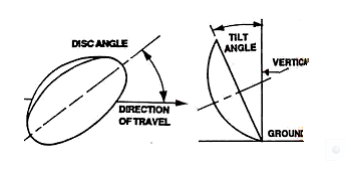 1. Increase the tilt angle to increase penetration ( depth of cut)

But increasing disc angle will reduce the depth of cut

3. Addition of weights on the plough will increase the penetrations

It is similar to standard disc plough , except that it can turn over the furrow slice to left or right side.

It not only improves the rate of work but also leaves the field flat and level.

This plough is found very successful for contour ploughing because the operation can be performed back and forth on the contour line without any problem.

The soil is turned in the direction required to prevent soil erosion.

Slopes can also be gradually leveled just by ploughing down the slope every year.

It saves water and time , improves irrigation efficiency and ensures an even crop growth and no water wastage.