There are a few accessories necessary for efficient function of the plough.

It is a small irregular piece of metal having a shape similar to an ordinary plough bottom.

Its purpose is to turn over a small ribbon like furrow slice directly in front of the main plough bottom.

This small furrow slice is cut from the left and upper side of the main furrow slice and is inverted so that all trashes on the top of the soil are completely turned down and buried under the right hand corner of the furrow.

It is a device used to cut the furrow slice vertically from the land ahead of the plough bottom.

It cuts the furrow slice from the land and leaves a clear wall.

It also cuts trashes which are covered under the soil by the plough.

The coulter may be

(a) Rolling type disc coulter or

It is a round steel disk which has been sharpened on the edge and suspended on a shank and yoke from the beam.

The edge of the coulter may be either smooth or notched.

It is so fitted that it can be adjusted up-down and side ways.

The up-down adjustment takes care of depth and sideways adjustment is meant for taking care of
width of cut.

It is a stationary knife fixed downward in a vertical position on the beam.

The knife does not roll over the ground but slides on the ground.

The knife may be of different shapes and sizes.

It is an auxiliary wheel of an implement to maintain an uniform depth of working.

Gauge wheel helps to maintain uniformity in respect of depth of ploughing in different soil conditions.
It is usually placed in hanging position.

d) Land wheel - It is the wheel of the plough which runs on the ploughed land.

e) Front furrow wheel - It is the front wheel of the plough which runs in the furrow.

f) Rear furrow wheel - It is the rear wheel of the plough which runs in the furrow.

For proper penetration and efficient work by the mouldboard plough, some adjustments are made from time to trime.

(i) Vertical suction and

It is also defined as the vertical distance from the ground, measured at the joining point of share and land side. (Fig.7a).

It helps the plough to penetrate into the soil to a proper depth.

This clearance varies according to the size of the plough.

It is the maximum clearance between the land side and the furrow wall.

This suction helps the plough to cut the proper width of furrow slice.

This clearance also varies according to the size of the plough.
It is also known as side clearance.

It is the perpendicular distance between share point and lower position of the beam of the plough . 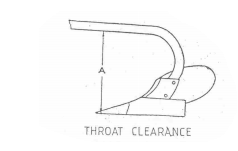