It is a vertical plate with a number of holes and fitted at the end of the beam. By
using the clevis depth of operation and line of pull are adjusted

It is a device used to make lateral adjustment of the plough relative to the line of
pull.

The perpendicular distance from wing of the share to the line jointing the point of the share and heel of land side is called size of plough.
The size of the plough is also
called as width of cut of the soil.

It is the point at which the resultant of all the horizontal and vertical forces act. The center lies at a distance equal to ¾ size of the plough from the
share wing

It is the line passing through the centre of pull, the hitch point and centre
of resistance

It is the total force required to pull an implement. 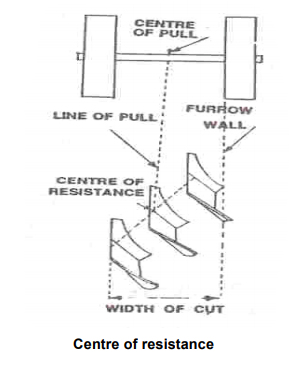 It is the horizontal component of the pull, parallel to the line of motion.
Draft , D = P cos θ
Where D = draft in kgf
P = pull in kgf
θ = angle between line of pull and horizontal.

It is the horizontal component of the pull perpendicular to the direction of motion.
This is developed if the centre of resistance is not directly behind the centre of pull.

It is the draft per unit cross sectional area of the furrow.