1. Share - It penetrates into the soil and makes a horizontal cut below the soil surface .

It is a sharp, well polished and pointed component.
Different portions of the share are called by different names such as
1) Share point
2) Cutting edge
3) Wing of share
4) Gunnel
5) Cleavage edge
6)Wing bearing 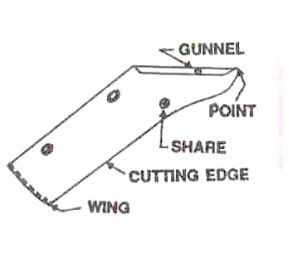 Material of share: The shares are made of chilled cast iron or steel.
The steel mainly
contains about 0.70 to 0.80% carbon and about 0.50 to 0.80% manganese besides other
minor elements.
2. Types of Shares
Share is of different types such as
i) Slip share
ii) Slip nose share
iii) Shin share
iv) Bar point share.

It is a common type of share, mostly used by the farmers.
It is simple in design, but it
has got the disadvantage that the entire share has to be replaced if it is worn out due to
constant use .
ii) Slip nose share: It is a share in which the point of share is provided by a small
detachable piece.
It has the advantage that the share point can be replaced as and when required.
If the point is worn out, it can be changed with a new nose without
replacing the entire share, effecting considerable economy.
iii) Shin share: It is the share having a shin as an additional part.
It is similar to the slip share with the difference that an extension is provided to it
by the side of the mouldboard.
iv) Bar point share: It is the share in which the point of the share is provided by an
adjustable and replaceable iron bar.
This bar serves the purpose of share point and landside of the plough.
3. Mouldboard: It is that part of the plough which receives the furrow slice from the share.
If lifts, turns and breaks the furrow slice. To suit different soil conditions and crop
requirements, mouldboard has been designed in different shapes.
The mouldboard is of following types:
a) General purpose
b) Stubble type
c) Sod or Breaker type and
d) Slat type.